Skip to content
Home » How-to » Great ideas: Strategy 6 – use a theme or vision
a
PrevPreviousGreat Ideas: Strategy 5 – know nothing, be curious
NextSeries: How to have great ideasNext

Great ideas: Strategy 6 – use a theme or vision 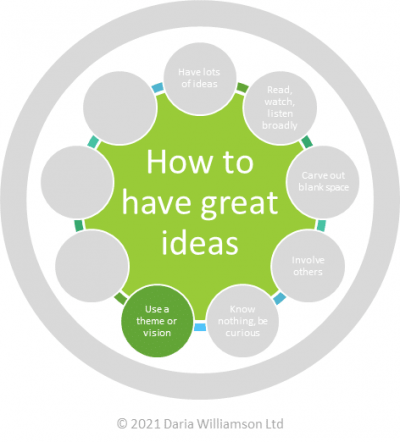 An often-overlooked strategy for generating great ideas is to use a theme or vision to drive our thinking. You can use this approach in conjunction with the strategies we’ve already covered: having lots of ideas, reading, watching and listening broadly, carving out blank space, involving others and knowing nothing, being curious.

How does a theme or vision help?

It seems logical that using a theme or vision to drive our thinking could limit the number and creativity of ideas that we generate. But often the reverse is the case.

Whenever we’re generating ideas, we quickly identify the obvious ones, then hit a roadblock. If there’s nothing that guides our thinking, we’ll skip onto another topic or approach and capture the obvious ideas in that area. This scattered approach might feel like we’re covering a lot of ground. But we’ll miss the more creative and obscure ideas that arise when we have to align to a specific theme or vision. By narrowing our field of focus, we have to think more deeply and be more inventive.

If you’re like most people, you’ll generate more inventive ideas when you focused on ways to use it around the house, because you needed to think laterally.

Anyone can identify that you can use a paperclip to, well, clip papers together. But if you hadn’t had to think specifically about uses around the house, you might not think of:

What sort of themes or visions will work?

Really, you’re limited only by your imagination! Sometimes it will be pretty obvious what you should use, other times you might try a couple of options before you find the “golden ticket”.

If you want to generate great ideas to improve your service, set a vision of “We deliver the best service in the world”. Then, consider what that look slike for your customers, your internal processes, your supply chain etc. From there, you’ll come up with a number of things you can work on to deliver world-class service.

Or if you want to create a great new product to take to market, you could set a theme that relates to your desired market, such as “products that people won’t leave home without”.

Visions are typically aspirational statements of a desired future, while themes can be statements or questions. Don’t get too hung up on whether the phrase or questions you are using is a theme or a vision – the key to this strategy is to have one or more phrases that help you get deeper and more creative in your thinking.

In 1995, Team New Zealand contested the America’s Cup, and became the first country to lift it from the USA. I was living overseas at the time, and had very limited access to coverage (ah, the days when we still used dial-up modems and our only “social media” was chat forums!) so only the most significant bits of information made it over to me.

One tale from the time has stuck in my memory. Sir Peter Blake, the head of Team New Zealand, was alleged to have responded to every idea and suggestion with one, single question: “Will it make the boat go faster?” (incidentally, the same question was used by the British rowing team in 2000 in their ultimately successful quest for rowing gold at the Sydney Olympics).

This question operated as a theme. Having a fast boat was vital to the mission that they were on, so speed was their unifying theme. Anything that deviated from speed, even if it seemed like a wonderful, creative and innovative idea, had to be put aside in service of the ultimate goal.

Team NZ had limited resources compared to the seemingly-bottomless pockets of the other syndicates. So, they had to be sure that anything they did was in service of improving boat speed. There was no point in having the best-looking boat if you only achieve second place.*

Steve Jobs and the vision that created the Apple juggernaut

It’s become almost cliche to mention Steve Jobs when talking about using vision to create success. But it’s undeniable that he was a visionary, and by using his vision to guide thinking, design and decisions, he and the rest of the Apple team changed the way the world related to computers.

Of course, there were other talented and visionary people working in the industry, who also exerted influence. And I don’t want to pretend like there weren’t some deeply troubling interpersonal issues that dogged Jobs’ career.

But he had a powerful guiding vision of “a computer for the rest of us”. This was back in the days when computers were expensive, difficult to use, and the exclusive preserve of business and academia. Imagine how different Apple products, software user interfaces, and indeed the world, might look if his vision had been “build the best computer for business”.

But he wasn’t always on the money – initially, he approached the development of what became the iPhone from the perspective of making it a really good phone. It had to fit in the user’s hand and not drop calls (a common problem with technology at the time). The first version of the iPhone didn’t even have an App Store, because Jobs didn’t trust third-party developers not to create something that would break the phone’s ability to make and receive calls. It was other employees of Apple who saw the opportunity that the iPhone represented and added all the “bells and whistles” that we now expect as standard in any smartphone.

The moral of the story? Getting the vision right once doesn’t mean you’ll always get it right. But, by involving others, and allowing their themes and visions to take flight, you’ve got a greater chance of success.

Beware the power of a metaphor

Our everyday language is drowning in metaphors (see what I did there?!) In fact, metaphors are so common that we don’t notice when we or other people are using them. But they have a big impact on how we think. If we’re not aware of their influence, we won’t recognise when and how they shape our thinking.

I recently read a fascinating article on how metaphors can change our opinions. Metaphors actually direct how we think about situations and problems, and the ideas we generate to solve them. So if you are going to use a metaphor in your theme or vision, choose wisely! Or better yet, choose several contrasting metaphors to help make your thinking more diverse.

We’re now almost two-thirds of the way through this series on “How to have great ideas”.

So far, the strategies we’ve covered are:

There are four more strategies in this series. If you’d like to read up on the seventh strategy, jump over to the series page, or scroll down to the bottom of the page to browse my recent articles.

And after this series is finished, I’ll be publishing a new series, titled “How to turn great ideas into great results”.

If you want to be the first in the know when new strategies and articles are published, sign up to my weekly newsletter below.

2 thoughts on “Great ideas: Strategy 6 – use a theme or vision”

PrevPreviousGreat Ideas: Strategy 5 – know nothing, be curious
NextSeries: How to have great ideasNext