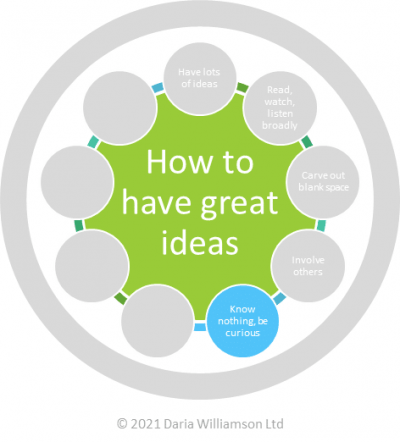 This strategy sounds counter-intuitive, but the “know nothing, be curious” approach puts us on the pathway to developing fresh perspectives and gaining insights. And from that, we can generate great ideas.

You can layer this strategy on top of the first four: having lots of ideas, reading, watching and listening broadly, carving out blank space, and involving others.

When you're knowing, you're not learning or growing

Our culture seriously over-rates the importance of appearing to know everything. How often do people try to come up with an answer rather than say “I don’t know”? This aversion to not-knowing is a big barrier to learning and growth.

Why? If someone won’t admit they don’t know something, they’re not open to learning.

There are all sorts of reasons that we aren’t open to learning – we may have been punished or laughed at for not knowing something when we were younger, or we could be trying to impress others, or shore up our sense of self-confidence. No matter the reason, when we are busy “knowing” we aren’t receptive to new ideas and information. And that limits our growth and development.

Edited 9th November 2021: I’ve struck out the following paragraphs as a result of this article, which explains that the Dunning-Kruger effect may actually be a quirk of how the self-assessments in the original studies were measured and calculated, rather than a cognitive bias. In the interests of demonstrating ongoing learning, I’m leaving in the references to the Dunning-Kruger effect (because who knows, someone might later end up proving that it is a cognitive bias, and then I won’t have to rewrite everything!)

Recognising when Dunning-Kruger is operating

The antidote: Know nothing, be curious

How to know nothing

There’s a thought experiment we can try, which helps us see the Dunning-Kruger effect in operation. When asked to their level of knowledge of how a common piece of equipment operates, e.g. a toilet, TV, or blender, most people are pretty confident (hello Dunning-Kruger!) But, when asked to explain step-by-step exactly how it works, most people quickly want to revise their rating! Someone in a learner’s mindset would act as if they don’t know anything about how the toilet, TV or blender works, and then go find out from someone who does (which is a way of involving others in your thinking).

Most of us probably can’t recall the first time we understood what a bike is, but we can probably remember learning to ride one. The uncertainty, the clumsiness, a touch of fear, the feeling that your feet weren’t cooperating. You had to be mindful, paying attention to everything, because you didn’t know which bits were important. And when you got mindless and stopped paying attention, you quickly realised your mistake, as the ground rushed up to meet you (unless, unlike me, you had training wheels!)

In the learner’s mindset, we delve deeply into a subject, paying attention to every aspect. We don’t know what’s important and what we can safely ignore; everything gets equal attention. So, one of the best ways to avoid the Dunning-Kruger effect is to pretend that you don’t know anything. Then, ask yourself who knows a lot about it, and go learn from them. It will feel awkward at first, but once you get the hang of being a learner, it’s just like riding a bicycle!

How to be curious

There’s an old saying: “curiosity killed the cat”. I reckon that someone who had something to hide made this saying up to keep themselves from being found out! Ask yourself “Who benefits if I can’t ask questions?”. Usually, when curiosity is deliberately squashed, someone is trying to maintain their status or control over resources.

If you encounter a situation where questions are viewed as threats, you might wish to exit the situation ASAP. Not only is that environment ripe for coercion and manipulation, but it’s also one where learning and growth will be completely stifled. And that’s a sure-fire way to boredom and irrelevance. Who wants to be part of that?

If you’ve got kids, have friends with kids, met a kid, or indeed have ever been a kid, you’ll be familiar with the dreaded “But why?” question chain. And you know that an inevitable outcome of the question chain is someone yelling (or wanting to yell), “Because I said so”!

Maybe this is partly why we are reluctant to ask questions. At some point, we upset someone we care about when we chose an inconvenient time to try to satisfy our curiosity. And so we decided that asking questions is bad. Then there’s the other aspect I’ve mentioned previously – our culture places excessive value on knowing and certainty.

What does it take to be curious?

There are several key aspects to being curious:

Letting go of the one "right" answer

The last key element is to let go of the idea of one “right” answer. That is, unless we’re talking about calculating the amount of fuel required to get my plane from here to there. In that case, I want the refuelling crew to get the right answer, first time!

But when we’re dealing with human interactions, innovation, and problem-solving there’s more than one way to skin a cat. Trying to find one right answer wastes time and energy that we could otherwise use to experiment with and tweak our approach. As the saying goes, “Done is better than perfect”.

And aiming for the perfect answer will also stop us from pursuing tangential ideas, stifling our creative thinking. After all, if the 3M engineer who accidentally created low-tack glue had discarded it and kept trying to achieve the super-tack he was aiming for (and, incidentally, if he hadn’t involved others), we would never have had the joy of Post-it® Notes. (See my previous article for one of the reasons why I love Post-it® Notes!)

Other ways to get curious

There’s no two ways around it – curiosity involves questions. Try these ones, or come up with your own:

We’re now half-way through this series. So far, the strategies we’ve covered are:

There are five more strategies in this series – to read them, jump over to the series page, or scroll down to the bottom of the page to browse my recent articles (and to watch a fascinating video from David Dunning explaining why ignorance fails to recognise itself).

If you want to be notified when I publish new articles and content, sign up for my weekly newsletter below.

3 thoughts on “Great Ideas: Strategy 5 – know nothing, be curious”