Skip to content
Home » Emotional Intelligence » Why A Fellow Traveller is More Powerful Than Empathy
a
PrevPreviousHow To Find The Sweet Spot For Your Strengths
NextOpinion: Why We Need to Embrace ParadoxesNext

Why A Fellow Traveller is More Powerful Than Empathy 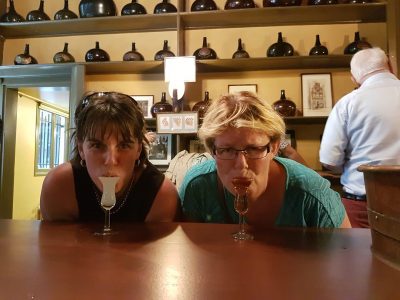 Empathy is wonderful, but what’s even more powerful is connecting with a fellow traveller.

I learned that from talking to my cousin

The picture by the title is a throwback to 2017 when I met up with my cousin Brigette who lives in The Netherlands. We were visiting the Wynand Fockink ‘Proeflokaal’ (tasting room) and apparently this is how you taste liqueurs there!

Brigette and I hadn’t seen each other for over 25 years. And in that time, we had ended up travelling a similar path, for very different reasons.

Back in the days of dial-up internet and chat rooms, she met a man virtually, then in real life, fell in love and uprooted her entire life to move to The Netherlands.

We had to settle into our new homes and lives with limited communication with the friends and family we’d left behind. We had to learn the languages of our respective adoptive countries without the help of Google Translate. We both love connecting with people, and trust me, it is a special kind of hard when you can’t have even a basic conversation with those around you.

We were in cultures very different from our culture of origin. Until you immerse yourself in another country for a long time, you don’t realise just how much of the way you live, think, speak and act is rooted in culture, rather than yourself and your personality. You keep bumping up against unexpected differences in “the way we do things around here”. It’s disorienting and very, very lonely at times.

When your struggles aren't just seen, but known

It was incredibly moving to talk about the struggles of those early days with someone who had been through the same sort of experience. Up to that point, both of us had only ever told our story to people who hadn’t done a solo full-immersion adventure. There were so many things we didn’t have to explain, so much context and nuance that we didn’t have to fill in for each other.

We connected deeply with each other’s story because we had lived it ourselves. Of course, there were some subtle differences – but they paled in comparison to the similarities of what we had gone through.

For me, this was one of the most powerful moments of being seen and understood that I had ever experienced.

Although we technically barely knew each other when I arrived in Almere, it didn’t take long for a profound connection to develop as we bonded over the hardships and joys that come from choosing to immerse ourselves in another way of living.

Empathy arises when someone bears witness to your struggles, and connects with the underlying emotions. But there is a whole other level of being known that comes from connecting with someone who has travelled the same kind of path as you.

After being in the Netherlands for six months, I told my brother-in-law I was going to sleep in the next morning, it being a Saturday. I translated it literally to, “Ik ga inslappen morgen”.

However, that sentence has a very different meaning in Dutch. I said I was going to “put myself down” just like you do for a sick animal! I should have said “Ik ga uitslapen morgen”.

When you’re learning a language via immersion, you’re spend a lot of time translating between your “home” and “away” languages on-the-fly. It usually works out OK, but not always.

I still vividly remember a situation where a friend yelled at me “You stood on the ball with me”. I had no idea what she was on about. But her yelling suggested it was bad. I slunk away, not knowing how to respond.

My host family filled me in: standing on the ball is the worst thing you can do in football, because it kills the game. She was telling me that I’d gotten in her way and ruined a situation for her. I didn’t feel a whole lot better, because obviously she was unhappy with something I’d done, but at least now I knew what she was on about!

The reminiscing that Brigette and I did also reminded me that there is no such thing as a unique human experience. It’s easy to get caught up in our own stories and believe that we are the only one who has ever gone through what we are going through – but countless thousands of people are going through very similar things at that exact moment. This is our “common humanity”, in the words of Dr Kristin Neff.

If what you’re facing today is hard and lonely, look around for someone who has walked the path you are on. Talk to them about your experience. Ask them questions. Tell them about your suffering and let them tell you about how you will not only survive but thrive because of what you are going through right now. You’ve survived 100% of your difficult days so far; you’ll survive this one too. And the road will feel a little easier with a fellow traveller by your side.

What path are you travelling?

What journey are you on right now? Who has travelled it before you? Who is on it right now?

How could you benefit from talking to and connecting with your fellow travellers?

I love meeting new people, and offering support and encouragement for the journey. If you’d like to share a virtual cuppa, I’d love to connect with you. You can book your virtual coffee session directly in my diary on this page.

PrevPreviousHow To Find The Sweet Spot For Your Strengths
NextOpinion: Why We Need to Embrace ParadoxesNext